Marketing that embodies a brand promise, rather than just communicating it, is always a delight. L.L.Bean gives us the latest example of this, with the outdoorsy retailer publishing a full-page newspaper ad you can only read outdoors.
The ad, from The VIA Agency in Portland, Maine, appears in today’s New York Times. At first glance—if you’re reading it indoors—it appears almost blank, with text scattered across the page that reads, “Just bring this outside.”
The brand’s new tagline, “Be an Outsider,” appears in large lettering below, along with an additional entreaty: “No, seriously. Take this outside.” Readers who do just that will see the page come to life, with more text filling in the blank spaces, eventually revealing a whole “Be an Outsider” manifesto. 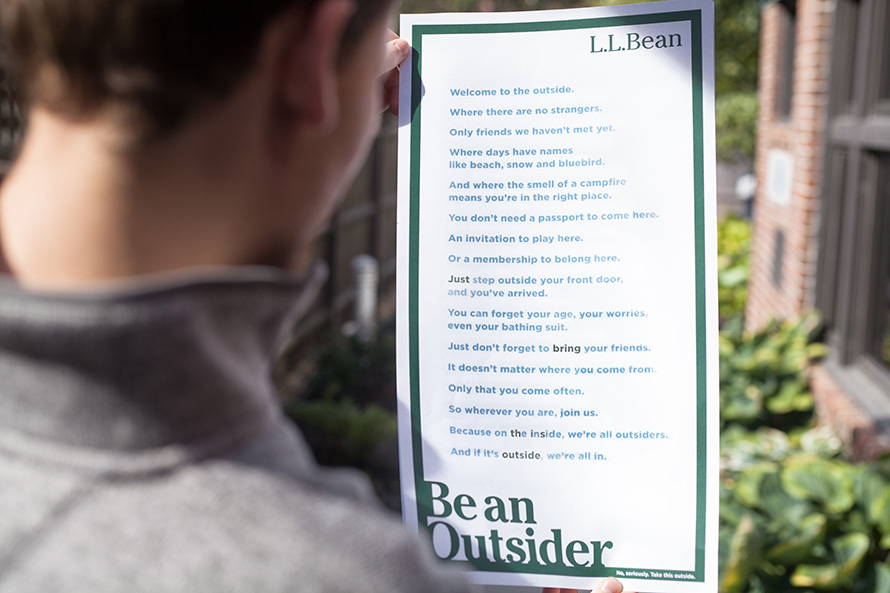 The ad was made with something called photochromic ink, which is colorless indoors but turns different colors when exposed to ultraviolet light, usually from the sun or a black light. VIA partnered with CTI Inks in Colorado to bring the idea to life.
Teddy Stoecklein, executive creative director at VIA, said the agency had written the manifesto and was looking for a creative way to present it to the world.
“VIA wanted to do it in a way that made sense and encouraged people to get outside. How do you get people outside? You write the manifesto in invisible ink that can only be seen in sunlight,” he said. “It took the confluence of a great strategy, a creative solution and incredible technology for VIA to pull off a modern twist using a traditional medium.”

The manifesto itself, Stoecklein added, serves “as an invitation to all people to join L.L.Bean outside, because outside is where we all belong. This sentiment is as relevant today as it was 105 years ago when L.L.Bean was founded.”
Here’s the full text of the manifesto:

Welcome to the outside.
Where there are no strangers.
Only friends you haven’t met yet.
Where days have names
like beach, snow, and bluebird.
And where the smell of a campfire
means you’re in the right place.
You don’t need a passport to come here.
An invitation to play here.
Or a membership to belong here.
Just step outside your front door,
and you’ve arrived.
You can forget your age, your worries,
even your bathing suit.
Just don’t forget to bring your friends.
It doesn’t matter where you come from.
Only that you come often.
So wherever you are, join us.
Because on the inside, we’re all outsiders.
And if it’s outside, we’re all in.
Be an Outsider.