When you put art in a gallery you kind of kill it. We have to create these white boxes so art’s many subversions don’t spill out onto the streets, undermining normality and society.
The frame around a poster can be seen to do much the same thing, demarcating the message from the legitimate architecture of the humdrum around it. A safe window.
It also frames a legacy, some bad old habits that no longer fit the connected world. A shame, because printed OOH ads make a disproportion­ately strong impression on millennials – surprised, I suppose, by how an image can just sit there, not swiping, refreshing or animating.
We often hear that we should “think outside the box” but, more often than not, thinking within its constraints is no less creative or fruitful. In fact, that poster frame is arguably the world’s most prolific of all creative canvases.
Tourism Ireland’s 2016 “Doors of Thrones” campaign by Publicis London really impressed me. What so easily could have been a lame print ad engrained itself in Northern Ireland’s story, driving tourism around the region. It was a lesson in how a physical object can be responsive and alive, and how a campaign can be more than just the conveyance of information and emotion.
Using similar logic, in 2017 the team created a 77m-long tapestry, again exquisite in craft and detail. In many aspects this is like a poster; flat, with pictures and stories across its canvas. But the tapestry is conscious of its historical references and significance.
Connectedness is not exclusive to cyberspace. Its tentacles reach into everything. So when conceiving an idea that engages and connects, it’s critical to get out of the frame, conceptually. We use so many resources and spend so much on ads, why wouldn’t we try to lay down those vital cultural connections if we could? And why do we have to stray from traditional formats to do this?

Dear “OK Cupid DTF”,I love you. I loved you when I first saw you and I keep on falling deeper.
It might seem strange that I’m writing a love letter given you are an outdoor ad for a dating website, but you’ve caused something strange to come over me and I’m feeling all old-fashioned.
Your “Dating deserves better” campaign that aims to redefine the acronym DTF, which is currently used in dating profiles to mean “Down To Fuck”, has got me. You’re showing how people can redefine it as sweeter somethings like “Down To Farmers market”, “Down To Fall head over heels” and “Down To Feel out the dancefloor”.
While other dating platforms are likely to ask if I’m DTF in an exhausting frenzy of rapid photo evaluation and sex-crazed screen-swiping, you’re asking me if I’m “Down To Floss”.
And you know what? I am. At last, a dating platform that knows what I need. There’s something about standing next to the one you love at the end of the day with toothbrushes in your mouths, staring silently into each other’s eyes through the bathroom mirror. I like that you’ve made the small things sexy. I think we
get each other. I think we can get along.
You make the world (of dating) fresh, and I hope others see it too. I hope you change expectations and behaviours toward non-gyrating, more peaceful gratification.
Your aesthetic makes my eyes sing – you’re an art gallery, an outdoor Tumblr blog, a 10-foot monument to proper love. You’ve used serious à la mode artists from Toiletpaper magazine and you look amazing, but they don’t overshadow your story. You wear the haute couture, it doesn’t wear you. You’re new and surprising.
Outdoor is perfect for you. Like a good date you’ve been thoughtfully crafted, your grandness makes my heart beat and I can’t swipe you away (not that I’d ever want to).
OK Cupid, your arrow has stuck. 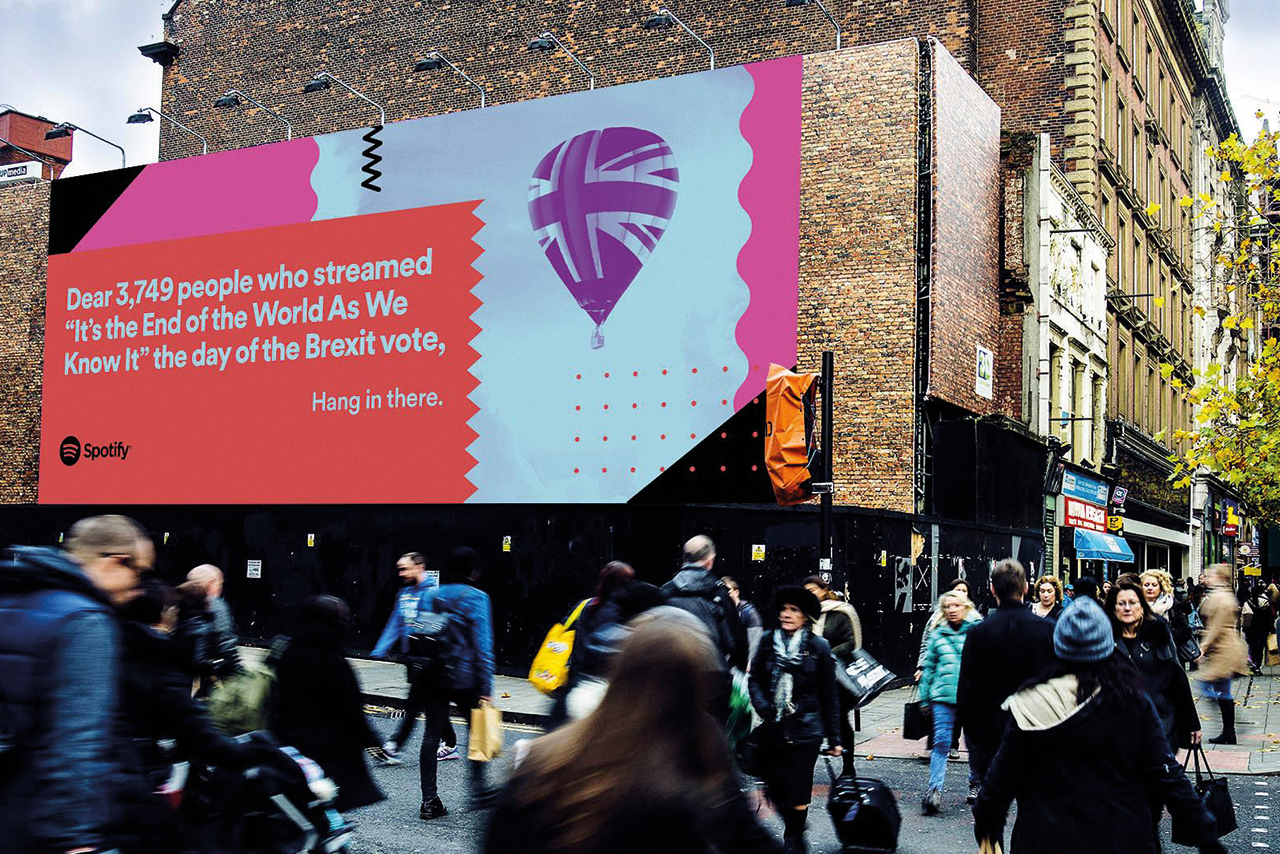 Dear 3,749 people who streamed It’s the End of the World As We Know It the day of the Brexit vote, Hang in there.” This is one of my favourite headlines from Spotify’s OOH campaign “Thanks 2016, it’s been weird”.
It was a year that ran away with itself. There was nothing we could do to tame it. All we could do was wallow in the music. Spotify cleverly used streaming data to bring to life some insights into our music listening habits. It picked up on the truth that not only is music a reflection of life, but so are the songs we listen to and the names we give our playlists – a good gauge of public mood. Localise this data and you’re onto a winner.
Yes – data can be boring. It lumps people into categories they don’t belong in; its sweeping generalisations are infuriating. But the way the data is used for this campaign is different. This is all about pulling out our human quirks – talking about things that are relatable, rather than stereotypical. The more insights creatives have, the more witty, entertaining and effective their OOH work can be.
That’s the wonderful thing about this campaign: the freshness of the insights, and the fact that it landed slap-bang in the middle of whatever we were all going through at the time.
It would be really interesting to be even more reactive with this campaign in digital spaces.
In 2016 we bade farewell to so many musical talents – and within minutes of the news of their death breaking, those beloved stars were propelled to the top of the streaming charts. Imagine if Spotify created these funny, relatable headlines based on that day’s news? Or if you could know how many people in your town were listening to DJ Jazzy Jeff and The Fresh Prince’s Summertime on a blazing hot day?
The art direction is bright, vibrant and true to Spotify’s Swedish heritage. Clean and bold, with no need for hashtags, social media icons or calls to action, it’s OOH creativity at its best. 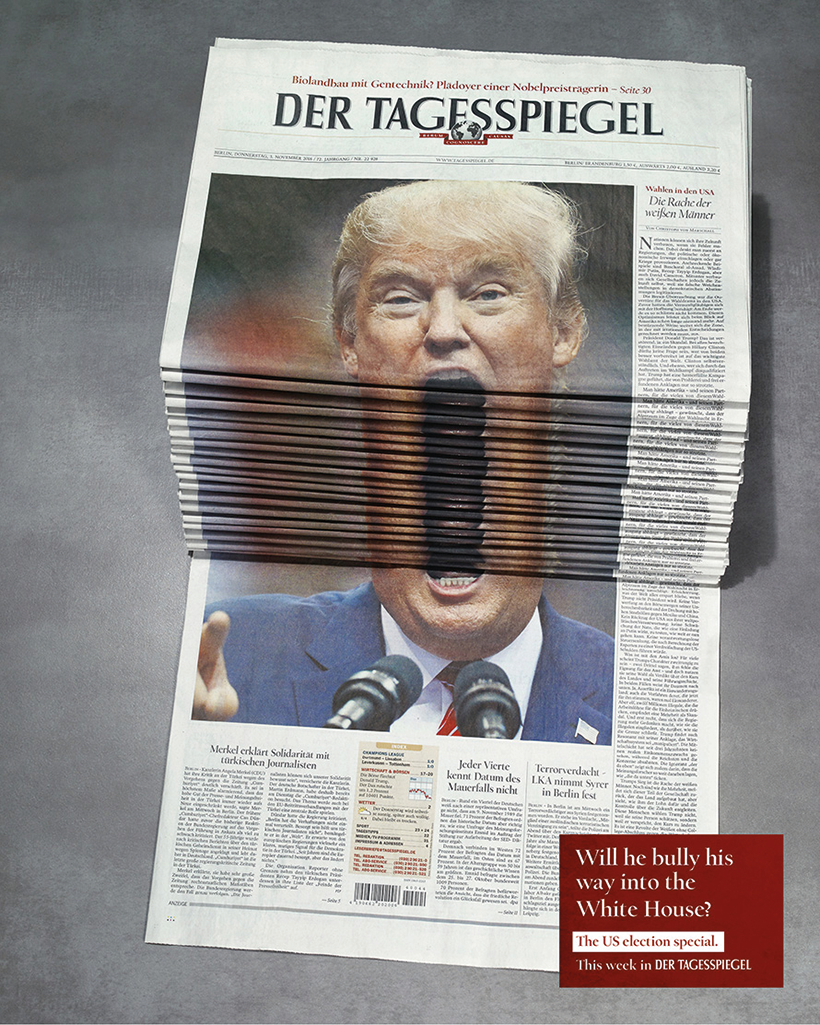 Politics can be a dry old world  –  that is, until election time, when the circus well and truly comes to town. Trump and Hillary squared up and we, the world, watched as the mad reality show of the US presidential election played out in front of our eyes. It was beyond a feast for the media as it was handed characters (or caricatures) like politics had never seen before.
Many brands jumped on the political bandwagon – how could they not? – when standing for something felt even more important somehow. Diesel delivered the beautiful and punchy “Make love not walls”, and I absolutely loved the elegance and power of AeroMexico’s’ “Borders” campaign. Pure class.
But the one that really stood out for me came from Der Tagesspiegel, a German daily paper. It’s not a regular publication for me, but it captured what I love so much about the powerful iconography that can be created in politically charged times when, in among the flurry of commentary and conversation, big, bold images can stand out above all the noise and come to define a moment in history.
In case you haven’t seen it, it’s OOH at its best – simple, bold and has a major impact.
The image of Trump on the front page, his mouth manipulated into a raging scream by shooting the pile of newspapers from above, is just bloody clever. No tricks or gimmicks in post-production needed – just
a smart idea, shot well, in-camera. It creates something original by taking the familiar and twisting it, and is made for the scale, impact and immediacy of OOH, where one powerful image can tell a story better than 1,000 words ever can.
We all remember Blair’s “Demon eyes” from the Conservatives’ “New Labour, new danger” campaign, and Obama’s “Hope”. They’re brilliant, but I love that this comes from a daily newspaper in Berlin. No fuss, no big budgets, just a great idea, simply executed and on a fast turnaround. Had it been the New York Times, I’m sure it would be more widely famous, and part of the visual lexicon of this now infamous moment in history. It deserves to be.
Ich liebe es.