On Nov. 11, the Louvre Abu Dhabi opened its doors. It calls itself the first “universal museum in the Arab world,” exhibiting art from a globalized perspective.
But the United Arab Emirates doesn’t really have a strong museum-going culture. Thus was conceived this insight: If traffic won’t come to the art, why not bring art to the traffic?
For U.A.E. Innovation month, the museum launched the “Highway Gallery.” Created by TBWA\RAAD (in partnership with the Abu Dhabi Media Company, Radio 1 FM, Classic FM and Emarat FM), the idea is simple: Use billboards to showcase 10 major works alongside the EE/11 Sheikh Zayed highway, which goes from Dubai to Abu Dhabi and supports over 12,000 commuters daily.
Through March 14, the “world’s first and only radio-guided highway gallery” stretches across about 62 miles of road. Upon approaching the billboards, drivers tuned to 100.5 FM, 91.6 FM or 95.8 FM will find their music interrupted by a museum audio guide—whose crystal-clear sound is reinforced by an FM jammer powered by solar panels.
Each story lasts about 30 seconds. (Insert speed-demon joke here.)

“This exhibition puts Abu Dhabi on the map of global innovations that underpin its axes of art, culture and information, in alignment with the national strategy that aims to position the U.A.E. among the most innovative countries in the world over the next seven years,” says Her Excellency Noura Al Kaabi, who is also Minister of Culture and Knowledge Development and the chair of Abu Dhabi Media.
“We built an advanced platform that provides the public with a variety of categories and interests, by providing them with rich and diverse content that contributes to our mission in transferring culture and knowledge, allowing the community to benefit from the technological development integrated in the U.A.E.’s media and cultural sectors.”
Renaissance paintings include Edouard Manet’s The Fife Player and Van Gogh’s 1887 Self Portrait, both on loan from the Musée d’Orsay, as well as Leonardo da Vinci’s La Belle Ferronière from the Musée du Louvre (see the image at the top of this story).
Ancient masterpieces include the Mari-Cha lion, an Islamic work from the Mediterranean; a coin inspired by Alexander the Great and found in the country, loaned to the Louvre Abu Dhabi by the Al Ain Museum; an 8,000-year-old two-headed statue, among the oldest monumental statues in human history, on loan from Jordan’s Department of Antiquities; and an Egyptian sarcophagus of Princess Henuttawy, shown below. 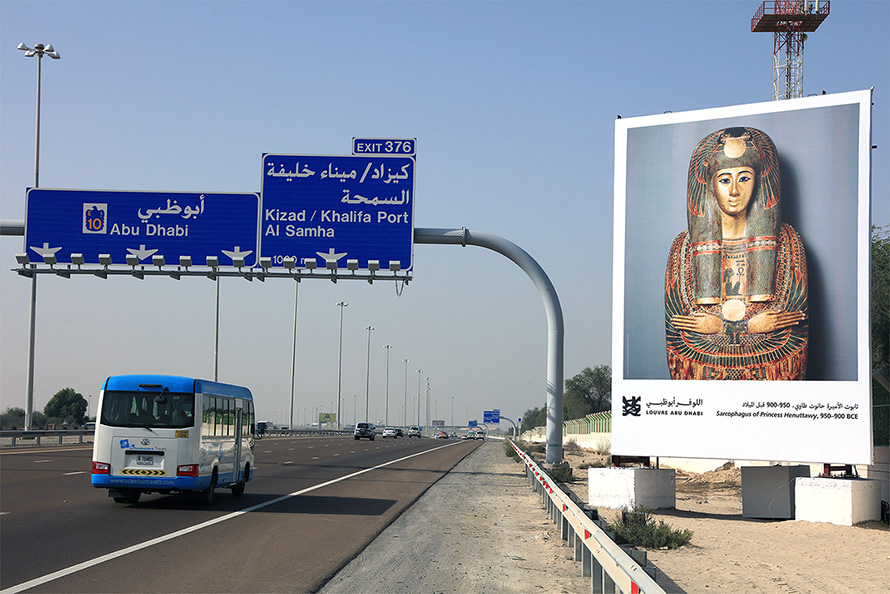 But there are also a number of modernist works on show at the Louvre Abu Dhabi. On the Highway Gallery you’ll find Gilbert Stuart’s portrait of George Washington, not to mention Osman Hamdi Bey’s Young Emir Studying and Piet Mondrian’s Composition with Blue, Red, Yellow and Black.
Below is Bey’s work, and Mondrian’s a few paragraphs down. 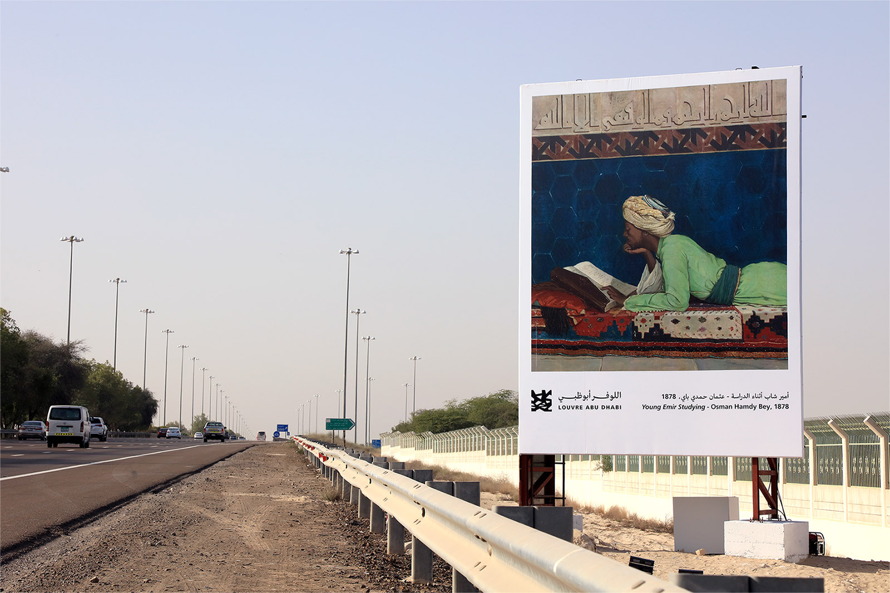 “Highlighting some of the museum’s iconic masterpieces through a unique audio-visual experience, Louvre Abu Dhabi’s Highway Gallery makes art and culture accessible to people, beyond the museum’s walls,” says His Excellency Mohamed Khalifa Al Mubarak, chairman of the Department of Culture and Tourism for Abu Dhabi. “Bringing to life these few but captivating stories from the museum, we hope the Gallery stimulates imaginations and offers new ways to enjoy art.”

Alongside the Highway Gallery, the Louvre Abu Dhabi is launching a public program that enables residents and visitors to access art through various cultural experiences. Events in March and April include a Korean puppet show for children, a Bach solo interpreted by cellist Sonia Wider-Atherton with dancer Shantala Shivalingapp, and a recital of Swayambhu and South African dances by Via Sophiatown.
The museum is also planning to present four special exhibits per year in partnership with Agence France-Muséums and other French museum partners, part of a 15-year intergovernmental agreement between the Government of Abu Dhabi and France.
Via: Ad Week